On February 3, my friend Nate died. He was only 35. It’s still heartbreaking and I’m having a hard time accepting that he’s gone. But I didn’t want to go back to posting whatever without posting something. Figured it was less annoying to throw a mostly selfish, mumble-jumble here rather than other social media (FB memories kept popping up for awhile and that was rough). 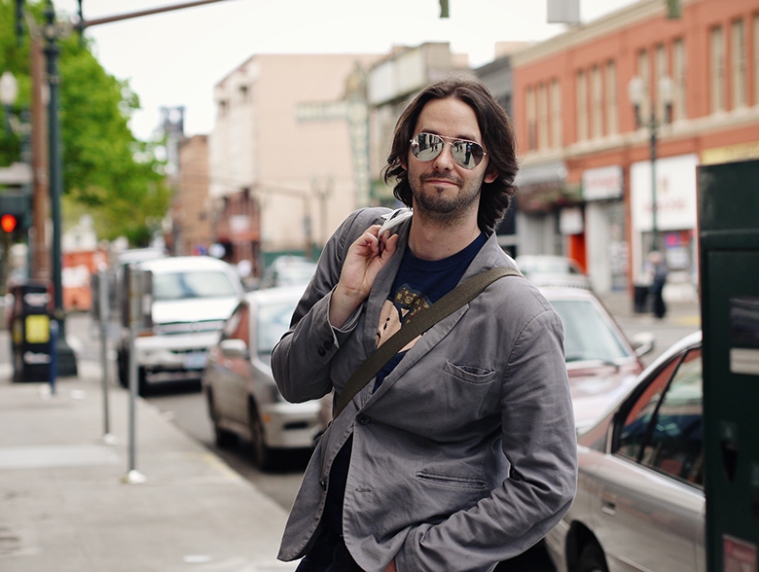 2012- one of the Portland Stumptown weekends. I’d just bought a new camera lens and Nate was always a good model.

I met Nate largely by chance in 2010 when he was pretty new to the Seattle area. Dan, a friend from college, was in town to visit a friend he’d made while teaching in Japan. That was Nate and I owe Dan big-time for introducing me to one of my best buds. I can’t for the life of me remember what our first conversation was but I remember liking Nate instantly and feeling like he was an old friend early on. 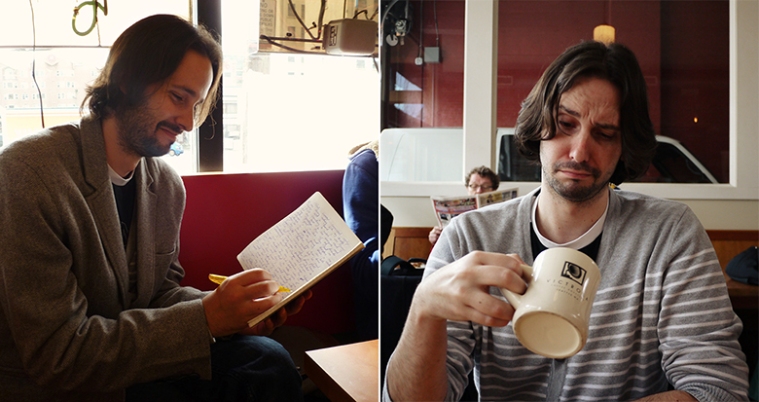 Reading texts and emails from back then, I appreciate how adaptable Nate was and how wide-ranging his interests were. Poor dude used to invite me to go snowboarding! Kinda funny to think he came into our nerd group as this healthy, athletic guy who went to the gym and was into swimming, hiking and snowboarding. It sucks that he isn’t around now that I like lots of those things too. He had this great, rare combo of being super chill and enthusiastically up for anything. So, I never went snowboarding with him but he came out with us for Emerald City Comic-Con, Stumptown, Linework… He went to all the dance nights with me– Britpop Dance night at the Lo-Fi where we’d chill in the red “Blade Runner” room and talk about Star Wars, then dance, then pull dumb faces in the black and white photobooth. We went to Talcum soul night where they spun rare soul 45s and put actual talcum powder on the floor. We went to J/K-pop night which was fun cuz our friend group is fun. 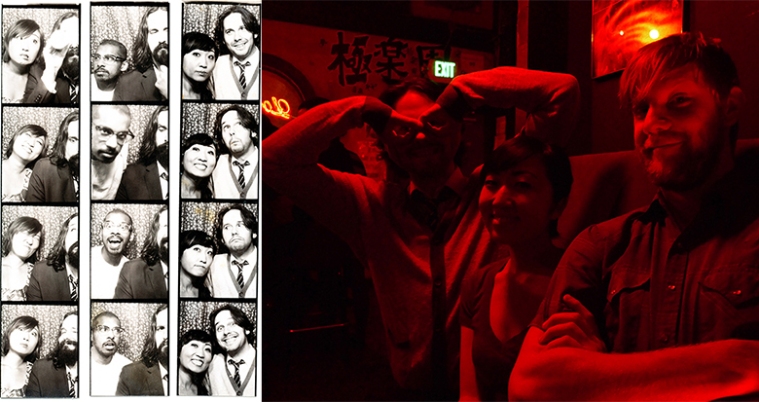 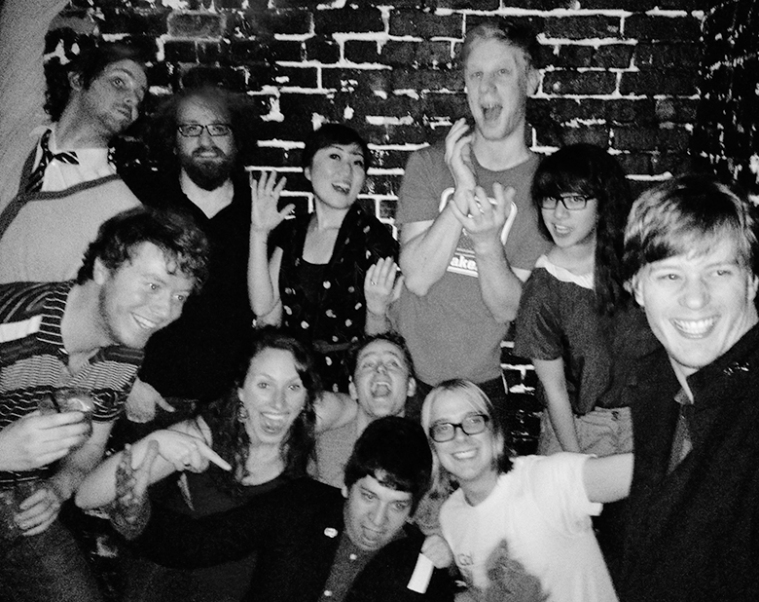 I didn’t realize until visiting him at the hospital that we were his “pub trivia friends,” but that’s totally accurate. We all went through big life changes over the years and trivia was something we did almost every every week. For me, it was a constant thing to look forward to through some not great times. Gavin and Nate had an insane amount of trivia facts between them. One of my favorite Nate reactions was when he’d get something wrong and be legitimately mad at himself, “goddamnit…” (he was rarely wrong). The other Nate reaction I loved was when he got an answer no one else knew and sang Usher’s “Yeah!” The team is still killin it out there and they’re still among my best friends. We made so many annual traditions– backyard fireworks and BBQs, bad movies, Portland trips. 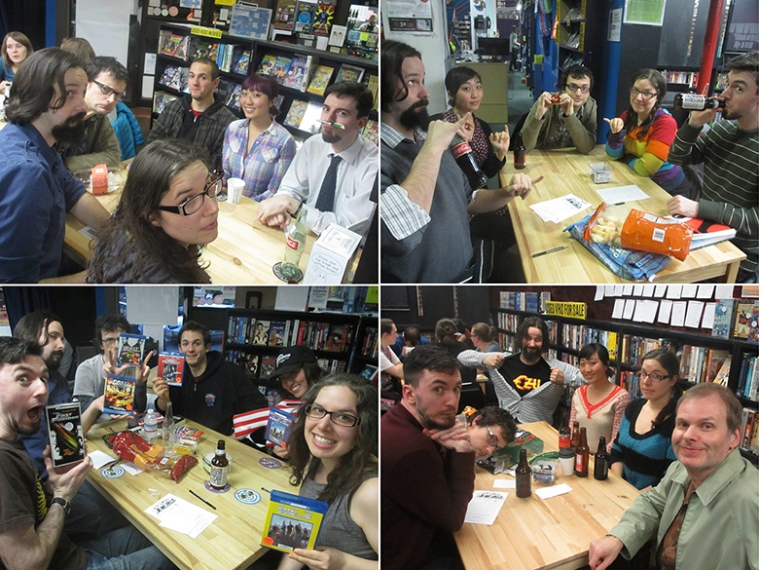 Nate loved Halloween as much as I did and who knows how he felt about theme parties but he always went all out for those too. Early on, he showed up to the Fantagraphics gallery as the Invisible Man- still one of the greatest DIY costumes! Torgo from Manos Hands of Fate for Angela’s Monster Party. Eddard Stark for Halloween at Gavin’s– he won almost all the party games. Kristy’s Dynasty birthday with Nate and Eric standing in for Krystle and Alexis. Patrick Bateman for our Cults and Killers brunch– he came in with a real knife and handed out “bone white” business cards. He was Agent Cooper’s voice recorder “Diane,” a Twin Peaks costume you NEVER see and I’ve been to multiple Twin Peaks parties. He won all-day Risk at Ian’s Belltown apartment. And came over for Christmas with me ‘n’ Dean ‘n’ Kristy once– we played Ticket to Ride and watched movies that were set on a train. He won that too and over the years we continued to brainstorm train movies we’d watch during future Ticket to Ride Christmases even after I moved. Classy duo birthday at the Polar Bar… 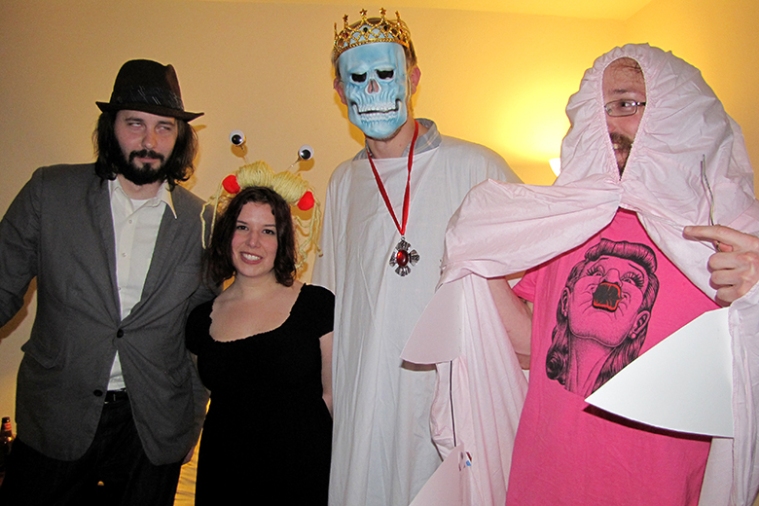 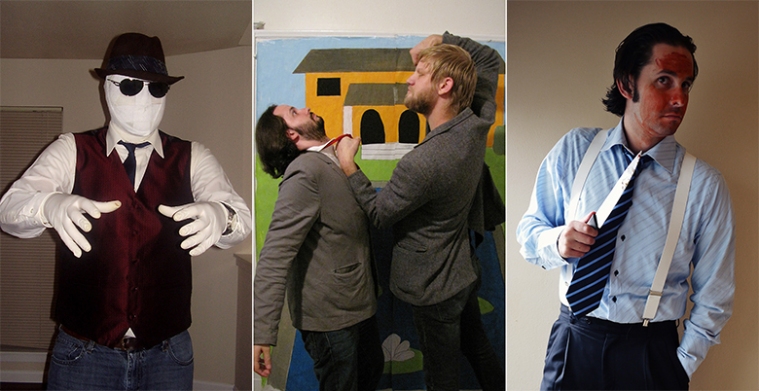 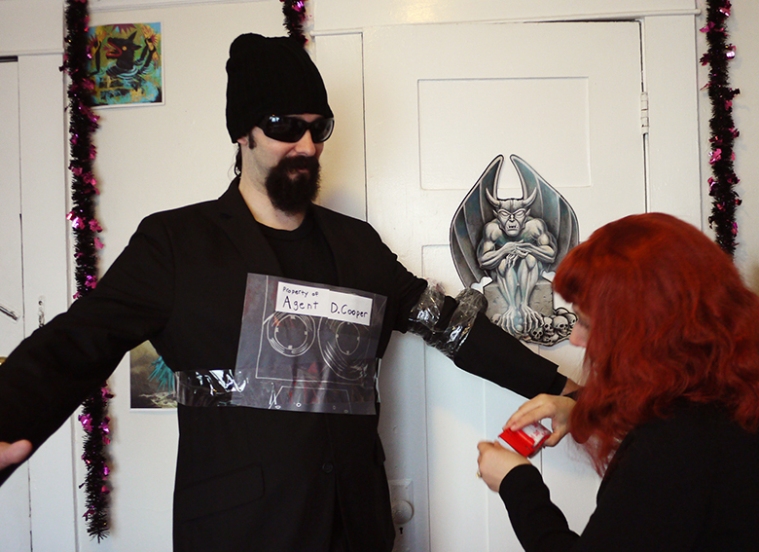 I dunno. There were a lot of birthdays and Halloweens and whatnot I’m not remembering right now. We started Pen Pal Book Club when I moved, read and discussed two, then put together a list of all the other titles we’d discuss. Nate who is committed and reliable, went ahead and read those books while I basically quit reading for a year and a half. But then, this is the guy who spent our Seattle “study sessions” successfully reading/translating The Hobbit in Italian before working his way through every David Mitchell book while I dilly-dallied on various handcrafts (pretty sure David Mitchell is the only author I got him into). I still have a few unpublished pen pal book club notes I’ll probably throw here when it’s less painful. 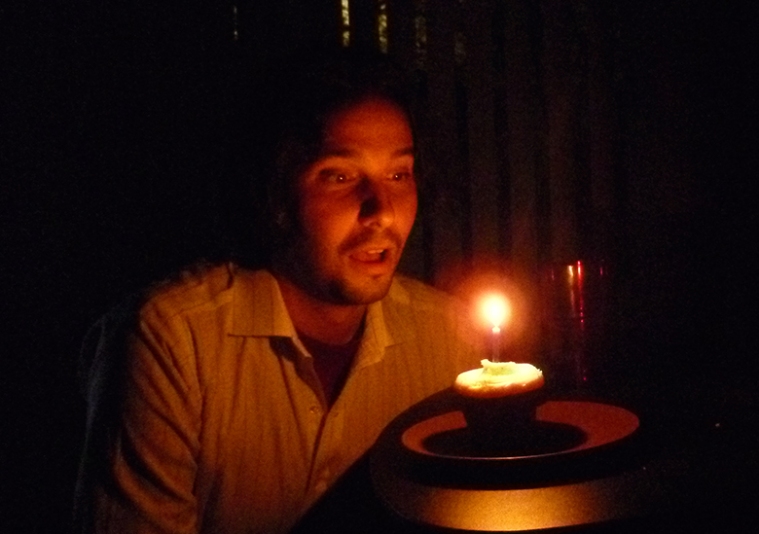 One of the biggest reasons Nate and I got on so well was that we were both more into talking about movies and books than about our personal lives. A part of me is sorry I didn’t tell him anything really heartfelt at the end and our last texts were Steven Seagal quotes and “Surprise Motherfucker” gifs… but I think he knew it was better to stick with the interests and jokes our friendship was built on. We both loved the experience of going to the movies, even if it was something we’d seen a million times. It’d be cool to list everything we saw together but my memory sucks so here are just a few that stand out: midnight movie classics at the Egyptian (Alien, Jurassic Park (Socks!), and Jaws); Holy Motors and Norwegian Wood at SIFF; Sword of Doom! I hadn’t seen a full episode of The Simpsons until he showed me a bunch and lent me seasons 4-6. It took me months to get through those and every episode of Treehouse of Horror. Poochie the dog/Merlin as Poochie is maybe our best in-joke. I didn’t care about the Oscars but Nate was into making predictions and watching ’em so I did too. The last movie he recommended to me was Wind River and the last movie we were gonna watch ‘n’ discuss long distance was Blade of the Immortal. It’s sad we won’t get to argue about the former and that we ran out of time for the latter. 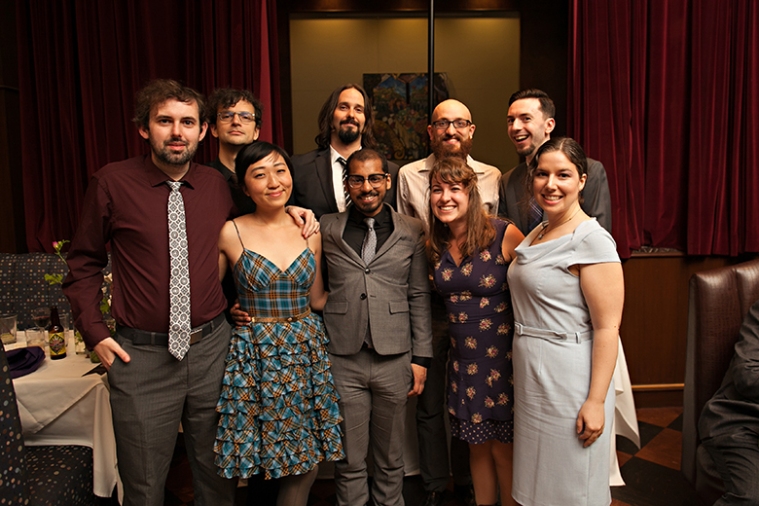 He trusted me to take care of Chateau Averyt which came with very little responsibility and a nice perk (pick up mail and water the bamboo, borrow all his books!). I managed to almost kill his bamboo while he was training for work in Baltimore and he still trusted me to house-sit again. He was a master of thoughtful gifts too– a tote bag and autographed copy of John Waters’ Crackpot from Atomic Books in Baltimore. A hot pink bento and chopstick set from Japan. The Blur ‘Country House’ castle as a cookie cutter from his last trip to Europe. Murakami books (yep- he introduced me to my favorite living author). The only thing he requested was a Seven Samurai tea set (when my hobby-of-the-moment was painting dishes). I spent five years promising him he’d get it and never delivered. He brought it up pretty much every time the B&N Criterion sale rolled around and asked about that motherfucking thing the last time I saw him. Daaaayum, I’m a real dick for not finishing it! 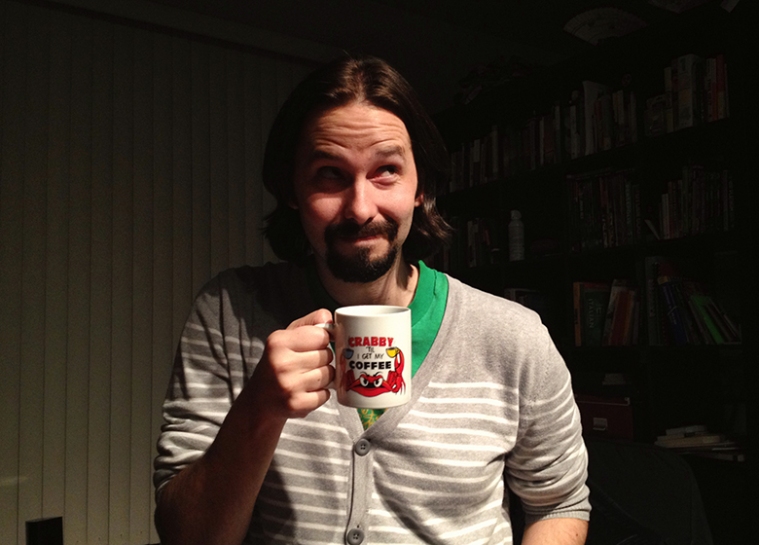 Ooooof. This is way too long. A few more memories. He’d take me ‘n’ Kristy shopping sometimes. For records or to IKEA. We spent a long time debating the best sofas and ottomans. I see myself as someone with markedly bad taste so the fact that he valued my opinions always seemed sweet. Also, he didn’t care that I was super mean and laughed at all the kids crying at the cat van in the parking lot. He wasn’t crazy about the Goodwill Outlet, my top shop in Seattle, but he came anyway and wore gloves to dig through the bins of broken glass and dirt. West Seattle and Capital Hill yard sale days– good stuff.

We ended up with different, limited diets but I’ll cherish some food memories too. Dim Sum with him ‘n’ Kristy at Duk Ali’s where I ate myself sick and had to lie down on his floor for an hour to recover. Sky-high burgers at Katsu. Ramen. Pizza with potato slices on top from the place up the road from his Uwajimaya apartment. Genki Sushi dollar days. “Summer of gelato.” Potluck pancake breakfast for dinner. I wish we’d gotten to eat Okonomiyaki together. 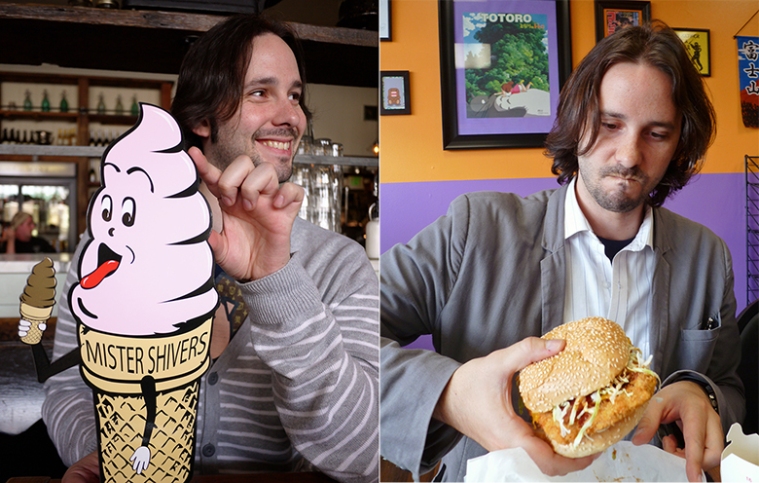 He’s the only friend in my Seattle crew I ever had anything resembling a fight with and he’s the only one who didn’t wish me well when I told him me ‘n’ Dean ‘n’ James were moving to Georgia. There was a period where we didn’t talk/write/text for a few months that I deeply regret. On one of my trips back to Seattle in 2016, Nate said I seemed a lot happier and that made him happy. We spent the day bumming around West Seattle and his apartment, laughing about Castle Freak, Family Fued and John Tesh. We didn’t talk about his health even though it was clear something was seriously wrong. We listened to 13th Floor Elevators when he dropped me off at the airport and we talked about hanging out in Athens or Greenville the next time he came out to visit his sister. 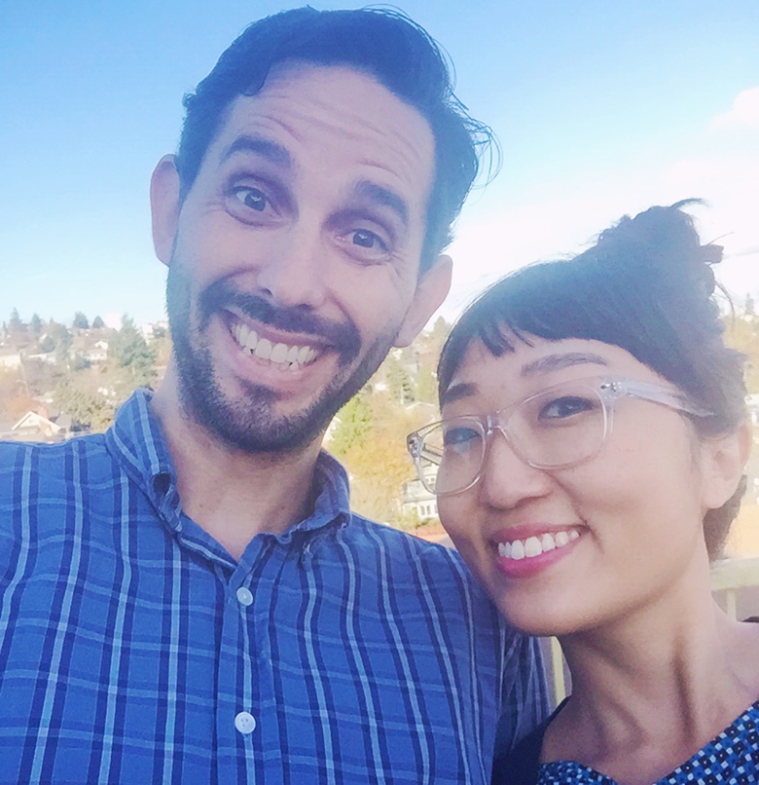 I got to see him one more time at that apartment, only for an hour or so. His mom was in town and he’d recently been taken off things that were making him miserable but was still building up strength. So, I knew then things were kinda grim but we didn’t talk about it much then either. Nate never wanted me to worry. Back when they’d tried surgery, he only texted me, “I’m going in for surgery and won’t be fully recovered for some weeks ahead. I’ll shoot you updates, but please don’t worry, ok?” Then we joked about space horror movies and then I didn’t hear from him for awhile. The last year was like that, lotsa gaps in our correspondence when he was dealing with all this shit, then we’d go back to texting/emailing about stuff we’d been watching. I’m lucky that while all this was going on, he still made time for his friends. I flew out back to Seattle for New Year’s Eve and had a really good three days hanging out with him, even though it was in the hospital. His family was there and my core Seattle crew was there, and it was like old times. We watched another bad New Year’s movie as per tradition (Tom Cruise’s The Mummy) and spent a lot of time laughing. Ach. Miss him terribly. Fuck this year. 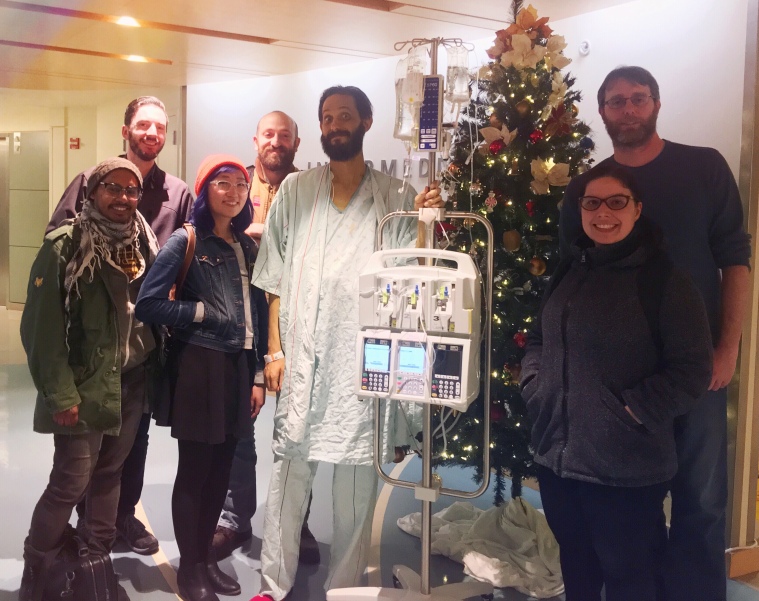