aka “Halloween Highlights with Wu” aka “Too Many Phone Photos!”

Halloween is my favorite holiday and, luckily, it’s Athens’ favorite holiday too. I only stayed in three days the entire month of October and still missed about a half dozen movie screenings, the costumed dog parade, and who-knows-what-else. Here are a few of the highlights:

Mrs. and Mrs. Face: Erin and I have different faces, figures and personalities– but people mix us up all the time or ask if we’re related. NOPE, but that older white-person confusion inspired our costumes this year so here we are as each other! …Or are we ourselves, pretending to be dressed up as each other?! 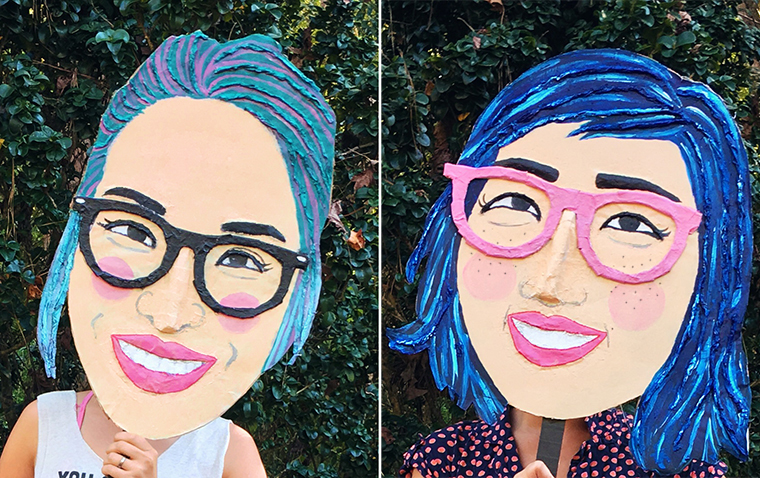 Jason almost died but still managed to meet me ‘n’ Erin for Horror Movie Pictionary. I thought it was kinda sweet that he was shy about Pictionary drawing when he’s not shy about drawing dicks all the time. Also sweet: how Erin couldn’t care less about horror movies but she always comes with me cuz she’s ride-or-die. I laugh-cried at Anna’s incredible Phantasm drawing (phantom + orgasm). We didn’t get it and either did her team but it’s genius. I think I did two (?) horror-ish trivias and learned I like King Kong wine and can’t identify chainsaw noises.

Andy and Kelly came over to carve jack-o-lanterns. Cat-o-lanterns for me ‘n’ Kelly. We cat ladies.

Between Flicker’s 31 Days of Darkness, Cine’s Schlocktoberfest, and my own ill-spent time, I watched and re-watched a lot of horror movies. Seeing these on the big screen was so fun: Frankenhooker, Phantom of the Paradise, Hausu. I somehow watched Ginger Snaps twice by happy accident! I attended my first (but not last) Gonzoriffic with Ethan and Rebecca and became obsessed with “Bad Girl Dracula.” Carey and I got to introduce a screening of Slumber Party Massacre, complete with pizza and sleeping bags. I also saw It, Mother!, and Happy Death Day. (This isn’t the most flattering photo but I’m posting it anyway cuz I don’t have another one with Kris and Dean. They’re wonderful. Re-Animator double date!)

Boulevard looks like a movie location for trick-or-treaters (and def a million kids know it!). We like to stop by my boss’s beautiful historic home then stop by The Ghosties show.

Naoko as Gogo Yubari in Refused Are Fucking Undead (stolen from her IG cuz she was soooo good!), Kelly as a pinata cuz I didn’t get photos of the bands but check out her sick DIY skillz.

On Friday the 13th, Erin and I got $20 tattoos together! This is my third tiny tattoo and my first in a little over a decade. I love it! Lemme tell you who didn’t love it though: Friday the 13th superfans. I posted it on Twitter, carefully avoiding any hashtag, and ended up with 70+ replies, retweets, and private messages. I love most of those movies too and get that this isn’t Manfredini-approved but get off my dick, dudes!

Evan and Neil hosted their second Dark Pandemonium Carnival Soiree. Can you believe Evan made his Donnie Darko costume?! I love catching up with him and my former co-workers at the ‘berry. Wish I’d gotten a photo of Eddie as Wino Santa, watching the Addams Family on mute with me. Unfortunately, I couldn’t stay long because I had to get up and run a half marathon the next morning!

On “fake” Halloween, we dressed up as GLOW wrestlers. It was fun but I was really uncomfortable wearing so little and my discomfort was compounded by some icy rain. I learned the true meaning of freezing my ass off that night and am now typing this with a gross cold! Honestly, my biggest regret is not drinking MORE and hiding my weakness behind my own Iron Curtain of boozy warmth.

The day after the Wild Rumpus/Dancin, we went to Eric’s Surprise Birthday Brunch. Kate and Eric are such a warm-hearted pair. I’m lucky to know them.

Ooof. I gotta run out the door soon to see Thor. Here’s a lazy/jumbled gallery of awesome!

I love Halloween and I love Athens! Byeee!

2 thoughts on “Halloween in Athens”