Or a long-ass post about my tiny trip (50 hours total). Right after I got back from Seattle, the election happened… So, it feels a little insensitive to post about goofing off when America has hit a new low of sadness and disunity. At the same time, it matters more than ever to hold onto hope and celebrate the good stuff, like far-away friends and far-left cities. Small consolation: unless something happened reeeeally recently, the INDECLINE micro-penis Trump statue is still on display at No Parking on Pike. I love you, Seattle.

Pre-trip: The Atlanta airport is a sprawling hell-beast but I like it anyway. They fly everywhere, offer ample vegetarian options, and fill the space with surprisingly dope art. Walking into Steve Waldeck’s light and forest installation is like entering LED heaven– trippy and soothing. Six hours later, the plane landed in Seatac and I full-on sprinted to catch the last light rail Downtown (MADE IT!). Enjoyed a brisk, post-midnight walk to the hotel and marveled at how different Downtown/Belltown looked from when we lived there. Pike Place Market is a bad example… but, seriously, a lot of things have closed. I’m officially a tourist.

Friday: I couldn’t sleep after my flight but luckily, the Ace Hotel is a beautiful place for insomnia. I’m a total sucker for the hip stylings and being there alone felt luxurious. The sun came up; chatted to the desk clerk about our mutual friend, Janice; loaded up on free Stumptown coffee; and window-shopped the kawaii goodness at Downtown Daiso before catching the bus to Fantagraphics.

Hit up the Fanta office for a classic Chiang’s lunch (the pan-fried noodles of my dreams!). Seeing everyone, especially my basement peeps and best gal Kristy, was wonderful. Martin’s cozy clown office (once my office too), Steph O. on football and trap rap, Kristy on books and boys. Jason and the violent cattails. Gary, Jacob, Anna, Keeli. It’s a shame to see Ruth’s junk art house has been scaled back even further but it’s still standing and that’s something. Afterwards, Dave Holmes and I visited Dean W. at Virginia Mason. His situation is no laughing matter but LOL at Dave Holmes when we learned Dean W. only recently started watching TV out of boredom. “I’ve got your diagnosis; it’s a lack of TV.” Haw haw!

I bought my Mangchi ticket back in August and am still dying over having seen them live with Arabella. I lost my gd mind. They’re the motherfucking best and a daily inspiration. A variety of highs: Kid Koala’s Yo Gabba Gabba, David Choe’s claws caressing Steve Lee, Steve in the tiniest underwear (and his legit rap skillz), Heather Leather, Money Mark, MoMo, and Dylan! The moshing, dancing, and mountain of free merch (posters, stickers, pins, patches, the coolest zine)! SteBee WeeBee fan photo (preternaturally youthful Asians!). Also, psyched to meet other DVDASA fans in the wild. Maybe this is how juggalos feel when they get together…

I’d sweat off my makeup and the cool night felt divine. We headed over to Speckled and Drake (“the duck bar”) and Dave G. materialized out of thin air to get in on our traditional black and white photostrip. Loose conversation ranging from comics, movies, immigration, acid trip birthdays, parks, insurance woes, New Orleans, London, James Jean.

Saturday: Took my gracious host, Kristy, out to breakfast at Cactus. Horror movie talk, free flan talk. I miss her so much! Met up with Gavin and Dave G. then blew my budget at Short Run on a bunch of rad mini comics. D’oh! I kinda hate myself for spending so much but I’ll get over it. There are worse ways to spend $$. I wish I coulda teleported back for Gavin’s Short Run Reading Party. 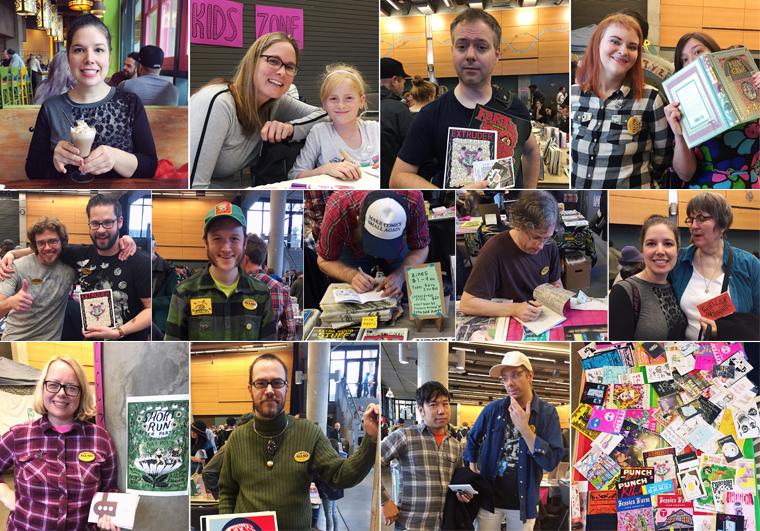 The International Fountain was still rigged for Halloween. We were drawn to the sounds of Bauhaus and stayed while Dave G. danced in the rain to Kraftwerk’s “Senor Coconut.” Dropped our comics haul off and headed over to La Marzocco, the cafe inside of KEXP, for fancy espresso. I got to meet Beth, fellow WordPresser and cat lady, in real life! She came straight from the ballet and is just as sweet as I thought she’d be. Bonus Keeli run-in.

Gavin introduced me to my new favorite shop: Nevertold Casket Company, a lavender-walled room with Twin Peaks floors and haunted oddities. There’s a taxidermy cat with a piano inside, drawers of antique photos, and a coffin bursting with balloons. Met the core crew up the block for hot soup at Lemongrass. We’d recently had the pleasure of hosting Mike and Jen in Athens for Popfest. It was great seeing them so soon back in the PNW (and the cat cam!). Hadn’t seen Ian and Annelie since they got engaged (yay!) and I squealed a little when he told me about recording at the former Lusty Lady (Seattle’s greatest fallen landmark).

I was pretty beat by this point but I’ve embraced the mantra, “Never save anything for the swim back,” so we went to the Short Run After-Party. Arabella bartending; Nail Polish and DoNormaal performing; Tony, the most huggable guy in the PNW; superstar dancer Alyssa; Dave G. busting out moves Usher would be proud of. ♡

Sunday: Walked under an overcast sunrise to meet Eric at the Five Point Cafe for early breakfast then walked him to work at the Smith Tower. The tower was built with the glamor of another time and the view at the top is incredible. I’d recommend their observation deck 100x over the Space Needle. Eric is one of my most fearless and ambitious friends. I hope some of his confidence rubbed off on me this trip.

Exchanged sad goodbyes with Kristy who I still can’t believe I only see once every two years now. :( Hopped on the C to Nate’s new digs in West Seattle (the nicest, newest apartment building I’ve ever been in- wow). We hit up a cool florist, Easy Street, Cupcake Royale. Mostly, I laughed so much it hurt about ba-ba-ba-ba-ba-ba-ba-basketball, Castle Freak, and Family Feud. Can’t wait til we both get Murakami’s Absolutely on Music.

And that was it. Nate dropped me off at the airport and we listened to The 13th Floor Elevators. This weekend was a quickie, distinctly more about seeing favorite people over favorite places (tho I fit in some great places too). I got home feeling tired, exhilerated, heartened, and inspired. Happy to be home to my husband and cats. Ready to face our rattled world.