This weekend I’ve gotta buckle down and prepare for the move but last weekend was pretty darn eventful! Asa Akira came to town so we bussed up to Lake City Way and saw her, then we hitched a ride with Gavin to Portland for Linework NW. Kristy went to both events with me because she is an incredible friend (but also a friend who doesn’t like having her photo taken so there are none of her in this post). We like to say we ‘normalize’ each other’s interests and never has there been a better example. You know it’s a solid friendship when you can watch women performing erotic acrobatics one night and maneuver through a jam-packed comic convention the next. Here are some photos I snapped, starting with Portland:

This was Linework’s first year and it was fantastic- free, well-curated, and PACKED with a remarkably diverse crowd. Books were flying off the table and Jen literally swept me off my feet at the Fanta booth. Also worth mentioning: we had a huge pack of friends traveling together this year (Kristy, Gavin, Nate, Steph O, Arabella, Dave, Dean, and me). I couldn’t keep track of everyone, especially in this swamped hall. 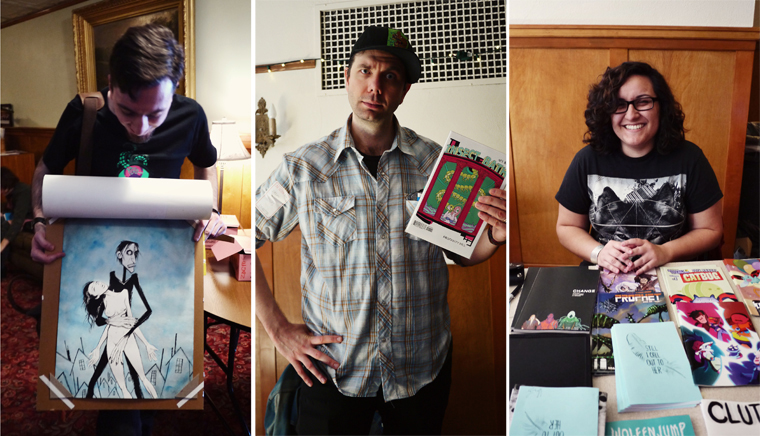 That’s Gavin with a gorgeous Tom Neely painting, Jason with Insect Bath #1– a weird and awesome collection of disturbing tales, and Sloane whose work I’ve been meaning to pick up for awhile- what a talented cartoonist!

This is what I picked up at Linework and Floating World. Tax freeee shopping spreeee.

Visiting our Portland pals. Met up with Ben and his lady for pizza at Sizzle Pie. Ben and I grew up in the same tiny town- thank goodness we both escaped unscathed! Met up with Tony where he works at Everyday Music. He used to work at Fanta and played on our trivia team- his laugh is one of my favorites.

These are my Stony Brook peeps Bublz and Melissa. They met us for froyo with Meghan and Boris (respective partners). Oh, and Rose who’s a big dog that likes being held like a baby. Wrong Island bond 4ever.

Froyo, YOLO, FroYOLO! This is the dessert of my dreams: non-dairy pomegranate raspberry yogurt with crushed oreos, mochi, and strawberry slices. Thank you, Tartberry for offering non-dairy froyo.

We went to Rimsky Korsakoffee for late night treats- a lovely experience for many reasons but a must-see because of their bathroom. There’s a dummy waving from a canoe and legs dangling in the ‘water’ from the ceiling! Dark photos cannot properly convey how rad and creepy this is. 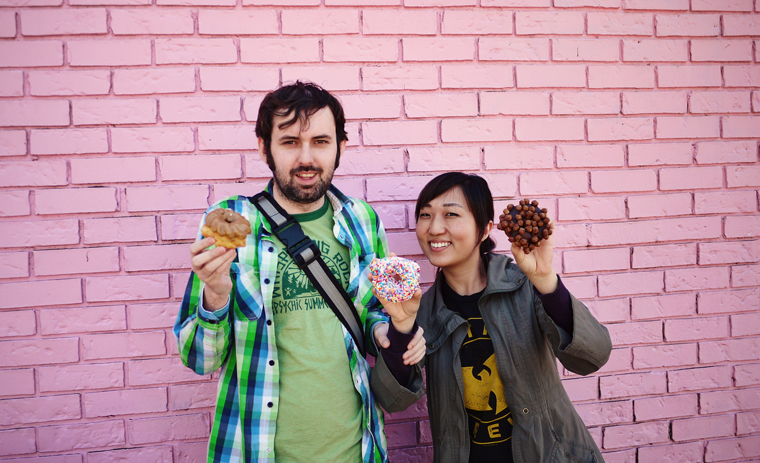 And no trip to Portland would be complete without swinging by Voodoo Doughnuts. Sweets for the ride home.

Going back to that Friday, here’s me ‘n’ James geeking out at the strip club (bleck- we look extra young and goofy!):

Asa Akira is an award-winning porn star but I didn’t know about her until last spring when I started listening to DVDASA, a podcast she co-hosts with David Choe. I’m a big fan of their show but James is the only friend I’ve been able to get into it. Kinda reminds me of Howard Stern but with Asians, David Choe yelling, and lot of outsider commentary. We also got to meet Bill Poon whose name and blog are simply wonderful. I got nervous and forgot how to operate my iPhone camera but they were super nice about it. James inked his knuckles and it got instagram’ed which totally made his night.

Our time in Seattle is running down faster than the last grains of sand in an hourglass. Three weeks left!