The Left Hand of Darkness takes place in the future on an icy planet called Winter. It follows Ai, an envoy from Terra (or Earth) and Estraven, the former Prime Minister of Karhide. Ai’s mission is to persuade the citizens of Winter (also called Gethen) to join the Ekumen, an alliance of other known planets. The most unique feature of the Gethenians is their lack of gender identity. For most of the month they are sexless and only assume male or female identities when “in kemmer”. There’s plenty of cultural background through haunting folklore tales and Estraven’s diary entries. I recently re-read this novel and am still blown away. The story handles ideas of gender and sacrifice brilliantly- leaving me with plenty to think about. Also, Le Guin has a lovely way of writing about the harsh arctic landscapes… haha, just thinking about this book makes me feel cold. 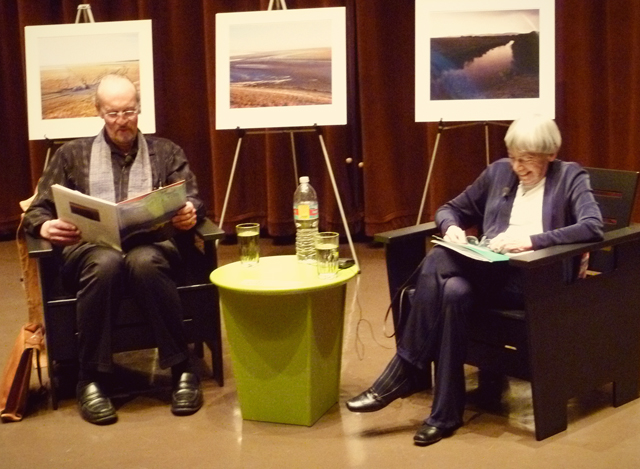 Roger Dorband and Ursula K. Le Guin promoting their book Out Here: Poems and Images from Steens Mountain Country at my local library back in March. It was great. Can you believe Le Guin is a giggler?